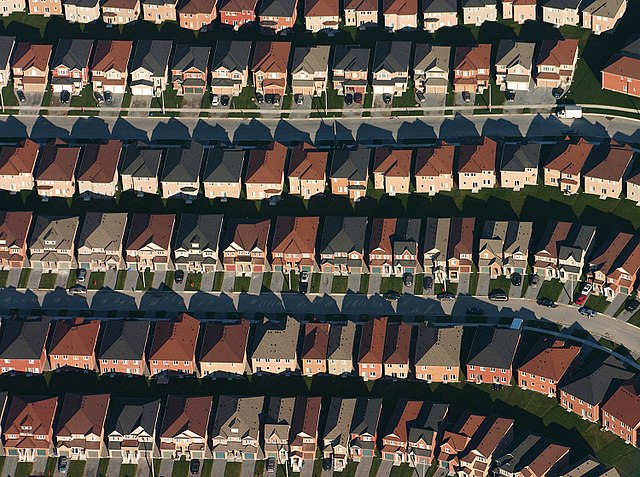 Save a few weeks of vacation and city-hopping, I’ve lived in the suburbs for the majority of my (relatively short) life. So I guess that gives me a reason, though not exactly the credibility, to write about them, or at least about the type of suburb with people who are there to raise 2.5 kids on green lawns, who spend thirty minutes driving to jobs in bigger, more important cities and thirty minutes driving back again. With laws to drive the homeless off to the city borders, laws on the color of paint your house can have, and laws on how full your trash bins can be.

The growth of suburbs in the United States increased with the return of soldiers from World War II. People were settling down and starting families, and the expanding population required more housing. From often crowded and dirty apartments cities, Americans with the means moved to safer, cleaner suburban areas, their migrations and commutes to white-collar jobs in the city center made easier by the affordability of houses, disposable income, and the growth of roads and highway systems. The greatest growth of the suburban population occurred in the 1950s and ‘60s. Middle class families went to the suburbs, leaving behind poor conditions in the inner cities. Cities were becoming increasingly business-focused, leading to higher land prices, but social conditions for many families living in cities worsened. Eventually, the rule became physical segregation by class and income—often correlated with race.

Edge cities away from the main urban center grew to support the decentralizing population. Checkerboard development, with housing tracts among parcels of farmland, increased and required greater resource transportation to support this urban sprawl. Roads were built for cars to get from place to place.

This leads us to today. We have more shopping malls, with bigger parking lots! More pollution! More zoning laws and big box buildings and houses that look the same! China seems to apply the idea with even greater commitment.

Credits and Disclaimers About Facts and Images

(If there’s anything I got super wrong, tell me! A lot of these facts are based off of urban development stuff I was exposed to in AP Human Geography, which probably has some outdated course material but which I found to be pretty interesting, especially concerning the decentralization of the American population from major cities. Also interestingly, some cities seem to be experiencing a regrowth (cool reading here) as people are finding homes there, and people are pushing for green and mixed-use development and walkable neighborhoods.)